On Fri 6th Oct, Justyn Rees Larcombe came to Tavistock to speak about his experience of getting addicted to - and then breaking free from - the lure of internet gambling. His story was serialised in the Daily Mail in 2014, and it portrayed an awful descent from being a seemingly-perfect husband and father to a man who eventually lost not only £750,000 but his job, his home and ultimately his wife and family.

Justyn is a very accomplished speaker, but hearing his story wasn't a comfortable experience. He was unflinchingly honest about the mounting deception and betrayals he inflicted on the people around him (especially his wife Emma and their two sons) as his addiction grew.

To take one example: if one of their sons woke up during the night, Justyn would tell Emma not to get up, he'd take care of him. He'd then go to his office and gamble online while his son sat on his knee. (This once almost led to him being found out when an ad for one of the casino websites he used came on the TV and his son said "Look - it's Daddy's company!")

Ultimately, he squandered his wife's savings, their equity from a house sale, and loans (gained under false pretences) from his mother and best friend. When his wife eventually found out what had been going on, she left him, taking the children with her. As a token of her disgust at his behaviour, she left her engagement and wedding rings by the bed. Justyn pawned them to pay for another bout of online gambling. As I said, his story wasn't comfortable to listen to, and these were just a few of the examples of he gave of the damage he inflicted on his family and friends.

Blessedly, Justyn was also able to tell of being rescued from his addiction. He credits his freedom from his addiction to the healing power of Jesus. He spoke of how he had grown up with an active Christian faith, but then how the demands of his City job led him to gradually drift away from it. Finally, he was reduced to packing up the few belongings he still owned into a bin-liner before going back to live with his mother. At that point, he realised he had hit rock-bottom and cried out to God to help him. And amazingly - God did. Within a few months Justyn was working again, and he helped set up the charity Rethink Gambling to help other addicts get their lives back.

It hasn't been a fairy-tale ending, however - despite attempts at reconciliation, his wife has since divorced him (although they remain good friends), and his best friend and his father-in-law haven't forgiven him. I found it both encouraging and sobering to realise that God does heal and He does forgive; He won't necessarily wave a magic wand to make everything better but He will help us to deal with the sometimes painful consequences of our actions. Even though much of what he said was painful, Justyn's story was ultimately one of hope - hope in a God whose love, forgiveness and grace can rebuild any life, no matter how low it may have fallen.

(You can read further information about Justyn's story below.) 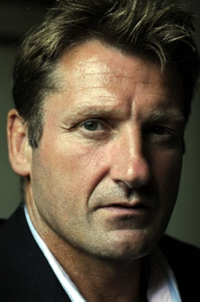 From riches to rags to reconciliation

After a highly successful career in the British Army Justyn Rees Larcombe had an equally glittering and well-rewarded career in the City. He had everything. Stunningly successful in the world of insurance, he was being fast tracked for further promotion in a global company. He had wealth, a big house, a Porsche, a Mercedes. He had a beautiful wife and three sons. He lost it all through an addiction to online gambling, blowing three quarters of a million pounds in three years. Realising he could fall no further, he found recovery and, in the space of two years, incredible restoration.

In his talks to a variety of audiences, Justyn tells his compelling story with great honesty and humility; he is both inspiring and challenging, and to those facing adictions, instructive and supportive. His recovery came with the support of family and friends along with rediscovering his faith in God.

Justyn has written about his life in 2 books. The first, "Tails I Lose" (for more information, see press release below), tells his 'riches to rags, to reconciliation story' with compelling, and often shocking honesty. Justyn is now a public speaker, media commentator, advisor to Government, the medical profession and leading national think tanks on the issues of problem gambling and addiction in general. He has successfully campaigned for changes in the laws relating to gambling.

In his second book "One Day At A Time", Justyn shares practical wisdom for those who may be struggling, or who have loved ones, struggling with secret habits, compulsions and addictions of all types. 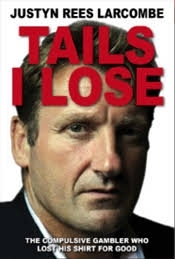 'I am no psychologist or professor of addictive behaviour. This is not a recovery manual. I just want to share my story in the hope that, in a world of instant gratification and a growing social acceptance of gambling as a legitimate activity, the truth that gambling can and does shatter lives will be accepted and acknowledged by the public, the betting industry and the government.' Justyn Rees Larcombe

A little flutter. Harmless fun. A sociable and often glamorous way to try your luck.

This is how gambling is frequently portrayed in television and social media advertising. Almost three quarters of all adults in the UK have gambled at some point in the last year, but just under 1 per cent of them are compulsive gamblers. The gaming industry says that's a tiny percentage - but that 'tiny percentage' represents 500,000 people whose lives are controlled and often devastated by this addiction, not to mention the wider knock on effect on their family, friends and colleagues.

Justyn Rees Larcombe was one of those 1%. After a glittering career in the army, he became a high flyer in the world of insurance in the City. He had a much loved wife and family, a beautiful home, a dream car. But one day, on a whim - 'I was 40 years old and feeling sorry for myself' - he placed a £5 bet on a tennis game, setting into motion a 3 year downward spiral which would eventually result in the loss of his job, his family, his home, his self respect and a staggering £750,000.

Like many addicts, Justyn kept his gambling secret from those closest to him. As he lost more money, he started to gamble larger amounts in search of 'the big win that would allow me to pay off some of the credit card debt.' Once his own savings had run out, he used his wife's savings, the deposit they had saved for a new house, his company credit card and the sale of precious family heirlooms to fund his addiction. Twice he cleared his debts or closed his betting account, but each time he started betting again within a short time. When his 4 year old son had a serious epileptic fit, Justyn held his hand as the ambulance rushed them both to hospital - whilst checking his progress on sporting bets via his phone in the other hand.

When Justyn placed a £17,000 bet on a tennis game - and lost it all - he stumbled into the 'murky world' of online loans; at the same time, he discovered online casinos. It was a dangerous combination. 'Online betting', writes Justyn, 'rarely feels like spending money... the remoteness of the currency makes the bet seem harmless.' At the height of his addiction, Justyn was placing up to a thousand bets over a 16 hour period on a typical day, but he still didn't accept that he had a problem with gambling. 'Gambling was my medication,' he writes, 'anaesthetic for the horrible reality of the life I had created.' As his debts built up and his desperation grew, Justyn lied to his best friend and his mother to persuade them to lend him money. He left his son strapped into the car for 2 and a half hours while he gambled online when he was meant to be taking him to the park. He sold his wedding ring and frittered away the proceeds almost immediately. He lost his job but placed a £200 bet on a tennis game on the way home.

Eventually the inevitable happened. His wife found out the truth about his gambling and confronted him - 'shocked, hurt and disgusted'. When she left him, taking their sons with her, he initially attended counselling but then sank into depression and started drinking heavily and gambling again. Having sold everything of any value in their home to fund his habit, he hit rock bottom. One day, his parents and brother arrived to tell him his house had come to the end of its lease and to take him home with them. He packed his few remaining possessions into a bin bag and went back to his childhood home to begin his humiliating, long and painful journey to recovery.

Author details: Today JUSTYN REES LARCOMBE is a trained money adviser and a debt advice volunteer. After coming very close to divorce, he is now living with his wife and sons again in Kent. He is in training for a cross Channel swim in August 2014 to raise money for a charity to help children suffering from hemiplegia, from which his son suffers. Justyn has a rising profile in the media, talking about the dangers of gambling and offering support and advice to those copying with gambling addiction. Talking about his motivation for writing this book, he explained, 'I wanted people to know that there is a downside to gambling; that, although many people gambled responsibly, there were some whose lives were destroyed. There is so much advertising and glamour surrounding the industry, I just wanted people to know the darker, dirtier side.'

Justyn Rees Larcombe is available for interviewsâ¨ and to take part in discussions linked to the themes explored in this new book. For media enquiries and review copy requests, please contact Rhoda Hardie on 01865 302742 or email rhodah@lionhudson.com